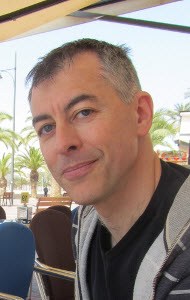 Mark Quirk runs Mindfulness Berkshire.  Most importantly, Mark is passionate about teaching and coaching with mindfulness and the positive difference it can make to those who practice it.

In 2012 he re-trained in Psychology following a successful career in the world of IT, mostly at Microsoft.  He was fascinated with the human mind and the potential of making a positive difference in peoples lives at home and work.  He started a training and consulting practice focused on enhancing human performance, in lock-step with improved resilience and wellbeing; and in 2015 created Mindfulness Berkshire to help extend his mindfulness teaching outside of the workplace.

His path into teaching mindfulness was somewhat accidental, starting with a university assignment that required the examination and comparison of three types of intervention.  His first choice of intervention turned out to have little supporting evidence for its suggested benefits. Whereas, to his surprise, mindfulness was supported by a massive amount of evidence from thousands of studies, coupled with a wide range of benefits and broad applicability from workplaces, sport and athletics to clinical use.  Here began Mark’s journey into deeper mindfulness practice and eventually teaching, running his first training in 2013.

He holds a master’s degree in applied positive psychology (MAPP) – where he conducted primary research into the application of meditation in the workplace and its impact on resilience. He has formally trained as a mindfulness teacher according to the guidelines set out by the British Association of Mindfulness-Based Approaches – which used to be called the UK Network for Mindfulness-based Teacher Training Organisations.  This training path is required by those wishing to teach MBCT (Mindfulness-based Cognitive Therapy), a derivative of MBSR (Mindfulness-Based Stress Reduction), recommended for certain conditions to the NHS by the National Institute of Health and Care Excellence (NICE) in the UK.  He is also trained in the use of ACT – Acceptance and Commitment Therapy, which stems from the behavioural and cognitive therapy models.

He is also a Precision Nutrition certified nutrition coach and critically, he also regularly practices mindfulness; which is essential not only as a mindfulness teacher but also as a business owner and especially as a parent.

This website uses cookies to improve your experience while you navigate through the website. Out of these, the cookies that are categorized as necessary are stored on your browser as they are essential for the working of basic functionalities of the website. We also use third-party cookies that help us analyze and understand how you use this website. These cookies will be stored in your browser only with your consent. You also have the option to opt-out of these cookies. But opting out of some of these cookies may affect your browsing experience.
Necessary Always Enabled
Necessary cookies are absolutely essential for the website to function properly. This category only includes cookies that ensures basic functionalities and security features of the website. These cookies do not store any personal information.
Non-necessary
Any cookies that may not be particularly necessary for the website to function and is used specifically to collect user personal data via analytics, ads, other embedded contents are termed as non-necessary cookies. It is mandatory to procure user consent prior to running these cookies on your website.
SAVE & ACCEPT
Loading Comments...